In this Radiation and Shadowing model of remote forces the electrostatic force field is caused by unbalanced,... opposing,... flows [ gradient ] existing in the E subspectra of the Prime radiation. The following photographs reveal the flow lines for the,... ambient,... sink ...and source cases. This model attributes these lines to the unbalanced flow of the Electrostatic subspectra radiation [ Pe ]. The popular standard physics model views these images as force fields and does not propose any cause for the existence of the lines or the force. Elongated satellites, using natural Gravity Gradient Stabilization, are responding to the unbalanced flow [gradient] of the Gravitational subspectra radiation in a manner similar to the polarized grass seeds seen in these photos. It should be recognized that the grains of matter, used to form these images, may cause a streaming effect that may not exactly represent the actual radiation flow lines.

Image, Courtesy B. Abbott;   Flow lines Courtesy of the Creator

The two probes on the left image above, have equal and opposite charges. The right image is the familiar magnetic line demonstration using iron filings. This comparison shows that the left E field solenoidal force lines join, analogous to the magnetic lines of north and south poles [ B field ].

Within this Radiation / Shadowing model, this demonstration is viewed as:

"A photograph of the work of the Creator, is worth a thousand words".

These two probes have equal electric static charges of the same polarity. Note that the flow (force) lines do not form into closed solenoidal paths;... like those which occur with opposite charges on the first photos above. Each charge provides a source of E field radiation which is more intense than the isotropic background E field. The field lines do not terminate on the opposite probe but merge into the ambient plenum of the E sub spectra of the prime radiation. 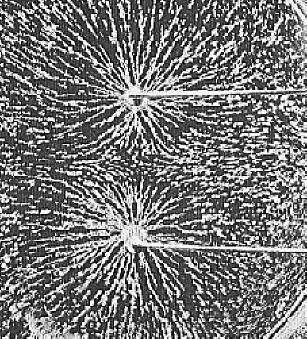 Image: Courtesy of B. Abbott

Each process is a system of frequency conversion / mixing within the infinite spectra of the Prime background radiation.. The free space ambient condition is statically isotropic with no unbalanced,...opposing,...flows and has no electro-static force fields. Dynamic unbalance of the E radiation, propagates,...producing EM radiation. 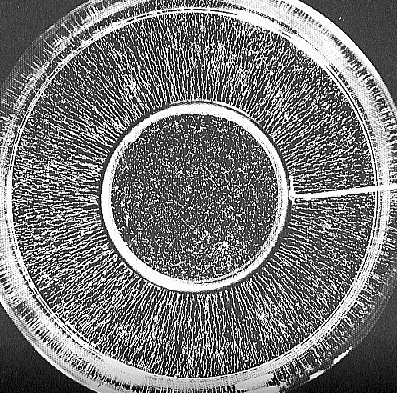 Images courtesy of  B. Abbott

The left image results when an above ambient charge is applied to the center circular conductor. The same polarity charges on the opposite exterior sides of the center ring are expected to repel each other and account for the accumulation of all charge on the exterior surface of  the ring.  Intuition suggests that there should be flow lines representing the repelling force in the center space. In this model the lack of flow lines indicates that the E radiation flow intensity may differ from ambient but has balanced flow within the center space.
Benjamin Franklin first discovered this strange phenomenon circa 1700's and a satisfactory description of the causal process remains unknown. His discovery consisted of noting that a charged pith ball was repelled from the outside of a cup with a similar charge, but was not repelled from the inside. This suggests that if a test charge of the same polarity were introduced to the center of the above test, all forces to the test charge would be balanced and this is the same result found in free space.

The fact, which Henry Cavendish established circa late 1700's, that the force between charges follow the inverse square law, helps to explain the lack of force lines in the center space. The inverse square phenomenon dictates that for any point inside the center area, the force in opposing directions is equal and opposite. Since all flow is balanced there is no gradient, thus there are no force fields and no polarization of the grass seeds. The balanced Pe field within the center circle could also exist at an intensity above the isotropic free space intensity. It would be of interest to see this same test repeated with a third charged element placed in the center space.
The right image above is similar to the left Van de Graph image above. The only change is the random shape of the center conductor and the concentration of flow lines to the pointed portion of the center conductor. 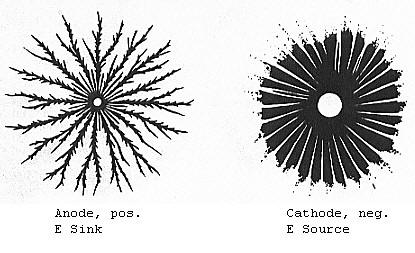 These images above were generated by the "attraction" of dust to the indicated electric charge polarities. With this radiation/shadowing model the positive anode represents a deficiency of electrons [positive ions], and is a sink for the E potential radiation. The cathode represents an excess [above ambient] concentration of electrons and is therefore an above ambient source of the electrostatic E spectra radiation.  It appears that these anode and cathode images are records of two separate experiments, so no solenoidal [ circulating ] flow lines would be expected between the two separate photos.

When viewing the cathode image, above on  the right, it is apparent that we are viewing a source of E field force. It must be recognized that in this radiation and shadowing model, every point source is also a sink in another un_seen spectrum. In this case if the source were a solitary electron, we would be viewing the E field flow from the source, but the electron's converging flow ( sink ) of un_named prime radiation remains un_seen flow in this experiment.

After studying the above Sink and Source images,... is it possible to deny the existence of radiation in the E force field lines?  There would be no reason for Faraday's lines of force to provide the two different types of images if a radiation flow, sink and source system were not present.  The readers that embrace other concepts as the cause of remote forces, may wish to compare the best evidence supporting their causal system with these reproducible E field demonstrations which support the radiation / shadowing system.
Where is any comparable evidence supporting the "GR spacetime curvature" as a causal medium for the transmission of remote forces?? ...
Where is any comparable evidence supporting the contention that Quantum Electromagnetic (EM) "vacuum" energy "virtual photons" exist and supports the transmission of force?? ...
Where is any comparable evidence supporting Mach's contention that "Inertia here is caused by the gravity" of the remote star field??

Non Electromagnetic Radiation   Some respondents and other theories suggest that all known radiation must be Electromagnetic and that the prime non EM radiation of this model is strictly hypothetical and without any evidence of a physical existence.
Clear and present evidence of the prime radiation occurs when the static E field remote force from a charged comb moves a sheet of paper. Is it possible for any man, who has in " natural philosophic matters, a competent faculty of thinking ",  to ever believe that the E field attractive force is due to EM radiation.
The fact that the electrons on the comb will attract some objects clearly shows that there exists an inflow of un_seen radiation, ( sink ) .
The fact that the electron's E field of the comb will repel other objects clearly shows that there also exists an outflow of radiation, ( source ).

Therefore the isotropic Universe is the source for the un-named constituent radiation spectrum making up the mass of the electron, and the electron is the sink. Following the sink / source attribute of all matter, the repelling of other negatively charge objects by the comb, demonstrates that the comb is also a source of the above ambient E field radiation.
If the negative comb only repelled other objects it could be argued that electrons are only an independent source of E field radiation. However,... when it is seen that excess negative charge also attracts other objects it is obvious that the electron is a sink for the converging un_named isotropic prime radiation ( source ) causing the attraction. Since this source action occurs throughout our known Universe, it is apparent that the isotropic radiation causing the "attraction", exists at a certain ambient level throughout the Universe.

If the E field repelling force  were due to EM radiation it would mean that a static charge was continuously expelling energy.   Force radiation does not expel energy.
Light and all EM radiation is only a resonant disturbance in the all pervasive prime E force field radiation. Readers that are reluctant to acknowledge the possible existence of these Prime force background radiation spectra as a force potential, should closely examine their beliefs and the basic concepts that the standard physics model provides to describe these images and the first cause of electrical attraction and repulsion, and all other apparent remote forces.

Now if one equates the Quantum vacuum energy and it's "virtual EM photons" to Prime radiant potential force and equates GR's "spacetime curvature" to the isotropic shadow surrounding all matter,... a unified force field system results that has combined the basic elements from three separate schools of work,... into one radiation and shadowing unified force field system.

The left image of a capacitor field shows fringe warping of the flow lines at each end of the plates. In simulating a capacitor the two conductors have equal and opposite charges. This fringe effect appears similar to the solenoidal patterns of the first positive-negative image. The flow characteristics of these source and sink images provide additional evidence for the reality of the prime background radiation and the shadowing model of forces.         Top Images:     Courtesy of  B. Abbott.

All planets, moons and suns are polarized by the negative E field radiation of the Cosmos.  This results in all celestial objects and their atmospheres manifesting a positive charge on the surface relative to a negative charged interior.

This lightning in the image below appears to be caused by the waterspout lifting the negative charged water from below the surface, to the air above the positive surface.  The same effect is seen during  volcano eruptions . Note that the lightning positive ion flow is flowing and pointing toward the the negative charge above. A web search indicates that  95 % of all lightning discharges produce this flow direction,... from the positive surface up toward the negative bottom surface of the clouds. The top surface of the cloud is positive due to polarization via the negative E field radiation from space. Positive ion flow is upward and electron flow is downward in the normal lightning strikes..

For the rare clouds with a high positive charge, as shown below, the flow pattern is reversed and the stream flow pattern forms arrows pointing towards the ground.

The web site, for the ForceField company  , provides a good selection of magnetic field images and offers a plastic film for viewing magnetic fields.